This evening I came across an old film, Tillie’s Punctuated Romance, showing on Turner Classic Movies. It was a silent film from 102 yeas ago. 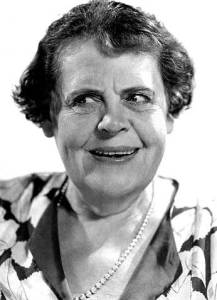 Initially I thought it was a Charlie Chaplin film because that’s who I saw and recognized right off. But as the movie progressed I noticed that Charlie wasn’t playing the adorable little tramp he was famous for. Then when the inter-scene title graphic showed up it was clear it wasn’t a Charlie Chaplin movie at all – he was just one of the actors. It was a Marie Dressler movie. (That’s her on the right)

This prompted me to find out who this woman who billed higher than Charlie Chaplin was. And it felt almost like was visiting a different world . . .

Her career in films floundered and she didn’t get her real traction until talkies in 1930. For the next 3 years she was a Star winning the Academy Award for Best Actress in 1933, the fourth time it had been awarded. At imbd there are two videos with her. You can watch the whole film I mentioned above and a trailer for Dinner At Eight. If you look at the billing for that movie, a movie with Jean Harlow, two Barrymores and Wallace Beery you will notice that Marie Dressler gets top billing. She played Tugboat Annie and if you’ve ever seen the TV or movies of that name you’ll know that Annie is no beauty – yet she billed above Harlow! Her film success was relatively short – she died of cancer in 1934. I feel like I’ve just discovered her. (I used to watch the TV show Tugboat Annie when I was young and remember liking her – not the same actress though)

She was from Canada and I can’t recall ever hearing of her. As a Canadian I’m a bit embarrassed on that bit. But she isn’t forgotten – she has a website as well as a posthumous Star on the Hollywood walk of fame.

In the film there’s a scene in a movie playhouse. And there beside the screen is the upright piano and the player is providing the sound track to the film. Which is how it was done in those days. I knew that already.

At some point I turned to my friend and said: I wonder when the soundtrack we are listening to was created?

The film was a Silent one so any actual prints would not include music or sounds but the version TCM was showing us did have music.And that music switched tempo and style on the fly with each different camera angle or scene change.

And then we wondered if the theaters got any guidance for the musician who had to accompany the film or not? Maybe something like ‘Marching music here, romantic music here, suspense now’ or did they expect the pianist to watch the film before everyone else and make it up as they went?

So now I have more research to do. You can follow up on this at Wikipedia and find out about cue sheets and scores. Those are the things that they sent along with the films . . . most of the time. And you thought that was what this blog post was about? Okay the title might have given you that impression but it was just part of the information I had to impart. Sound cues was question but Marie was a (re)discovery.